Taste Fellini’s Rome at these 4 Restaurants

2020 is a big year for fans of “maestro”, marking 100 years since his birth in 1920. But apart from his native town—Rimini, on the Adriatic coast—there’s another city which plays a central role in Fellini’s cinema: Rome.

Universally considered one of the most influential filmmakers in cinema history, Federico Fellini is a true legend. In a career spanning almost 50 years, he’s garnered countless awards and has managed to fabricate an entire cinematic universe composed of carnivalesque societies and good-natured fools as main heroes.

2020 is a big year for fans of “maestro”, marking 100 years since his birth in 1920. But apart from his native town— Rimini, on the Adriatic coast—wonderfully depicted in the films I Vitelloni and Amarcord, there’s another city which plays a central role in Fellini’s cinema: Rome. The Eternal City was a sort of second home for Federico, who’s set some of his most famous movies in the shadows of the Colosseum.

If you’re looking to celebrate the genius of Italian cinema and his 100th birthday—look no further than a visit to Rome. To help you to live this experience to the fullest, we’ve created an itinerary with locations immortalized in Fellini’s movies, for each pairing them with a restaurant where you can relax and live that La Dolce Vita. Go ahead and take a bite out of Fellini’s Rome. 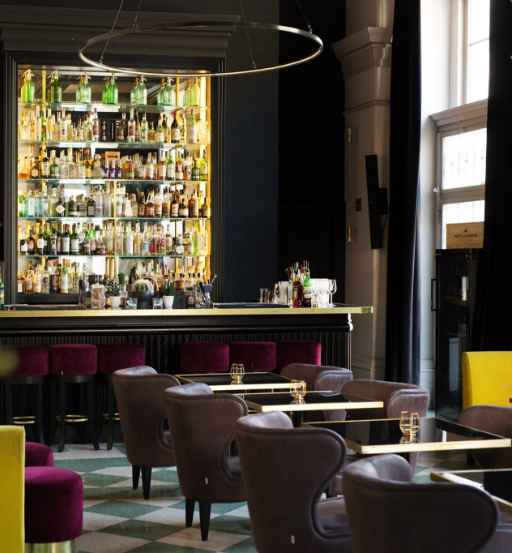 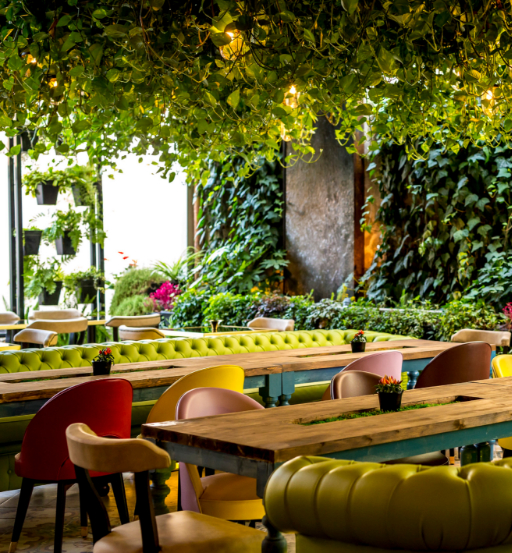 La Dolce Vita, one of the most famous movies by Federico Fellini, follows the life of writer Marcello Rubini (Marcello Mastroianni) as he journeys through the upper echelons of Roman society in 1960s. The heart of glamour and excess in this period is Via Veneto, with its roaring clubs and bars where celebrities, intellectuals and heiresses meet every night. This area is now for the most part touristic, abundant with shops and luxury hotels. But—if you’re looking for a calm dinner, walk for fifteen minutes you’ll reach the restaurant Madre.

Set inside a former convent, Madre would have been a perfect location for a Fellini’s film with its vine-fringed terrace, red velvet barstools and pastel-green tiles. Beside the enchanting design, this restaurant is quite famous for its food, with Italian and South American dishes meticulously prepared by Riccardo di Giacinto, the Michelin-starred chef who runs the kitchen.

Pizza, ceviche and spirits are what Madre stands for. The menu is tapas style; you can, for example, start with garlicky prawns and then move on to ceviche, which you could have in its classic version, or experiment with its  other variants with shrimp, tuna, or mixed seafood. The Italian part of the menù is mainly made up of pizza and desserts.

If you’re not that hungry, you can opt for a cocktail by mixologists Emanuele Carlà and Cristiano Bronzini. The spirits are all South- American inspired, while the wines are mainly Italian.

The White Sheik is Fellini’s first solo movie. The film is about a man who brings his new bride to Rome for their honeymoon and to introduce her to his family. The young woman soon sneaks away to find the hero of her romance novels, ‘the white sheik’, leaving her husband in hysteria as he tries to hide her disappearance from his relatives, who are waiting to go visit the Pope.

At the beginning of the movie, we can see the couple has chosen an hotel close to the church of the Santissima Trinità dei Monti, best known for its commanding position above the Spanish Steps which lead down to Piazza di Spagna. This is the “touristic heart” of Rome, where you can take pictures to post on social networks or buy postcards.

If you are looking to enjoy a different atmosphere for lunch, within ten-minutes walking distance you’ll come across “Adelaide”.

The name of this restaurant, located within the Vilòn hotel, is a tribute to Princess Borghese. It is also familiarly called “In Salotto”, as a tribute to the altruism and grace of Italian hospitality. The location offers a magniloquent and baroque atmosphere: the dining room is full of Deco details, audacious colours and capturing frames on the wall. In spring and summer guests can also choose to eat in the fascinating jungle garden, between ferns and philodendrons, totally immersed in a bohemian environment.

The menu is a tribute to Mediterranean cuisine and changes according to the season. You can find classics of the Roman tradition with fresh modern twists. An example? Try “Il Carciofo si fa in tre”, a dish made of roasted artichoke, raw prawns and almond milk, or “Napoli Tokio solo Andata”, or raviolo with cuttlefish genovese and parsley scented extra virgin olive oil. After dessert by pâtissier Andrea De Benedetto, you can choose to lounge at the bar, cocktail in hand, while listening to jazz or bossanova. 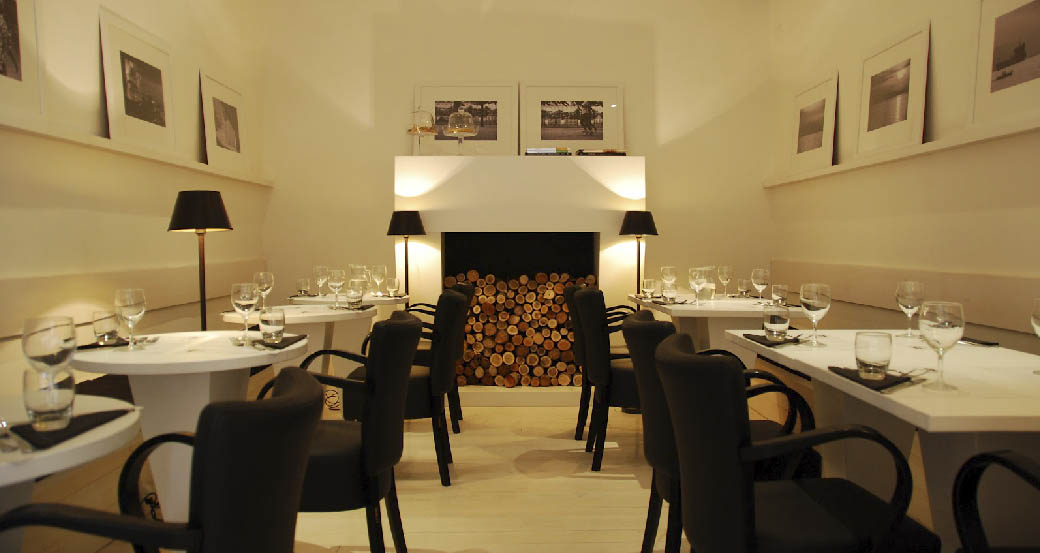 Roma is a tragicomic homage by Fellini to his beloved city. The movie depicts the director’s move from his native Rimini to the Eternal City as a youth; this is only a pretext to show a series of loosely connected episodes set during both Rome’s past and present.

In Roma you can see some of the most famous locations of Rome, including “Castel Sant’Angelo”: here a group of bikers starts a night race that will led them to the Colosseum. This fortress, located on the right bank of the Tiber, is not far from Vatican City, an area where sacred and profane perfectly mix together.

Among the many restaurants and clubs of the district, we choose “Caletta St.Peter”. This New York-inspired bar is really close to St. Peter’s Church, and fascinates for its sophisticated atmosphere. Everything in the decor is well balanced, with exclusive design and the predominance of black and white colors.

The place is quite famous for its seafood meals: all the ingredients used for the recipes are fresh, and the fish is brought here every day from Formia and Ponza. You can start with thinly sliced mediterranean octopus and continue with mussels, calamari, shrimps and sea bass. All accompanied by a glass of fine wine, of course. 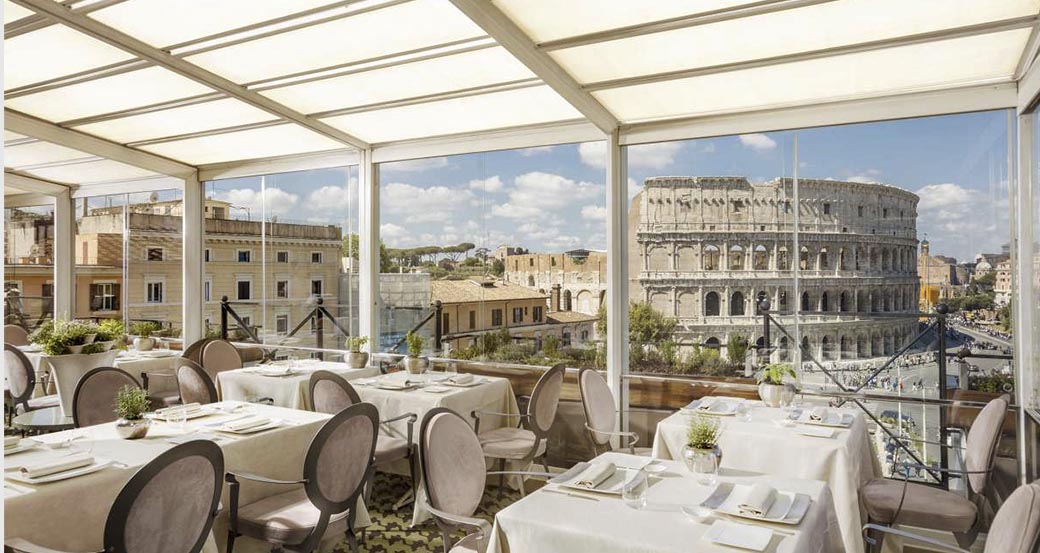 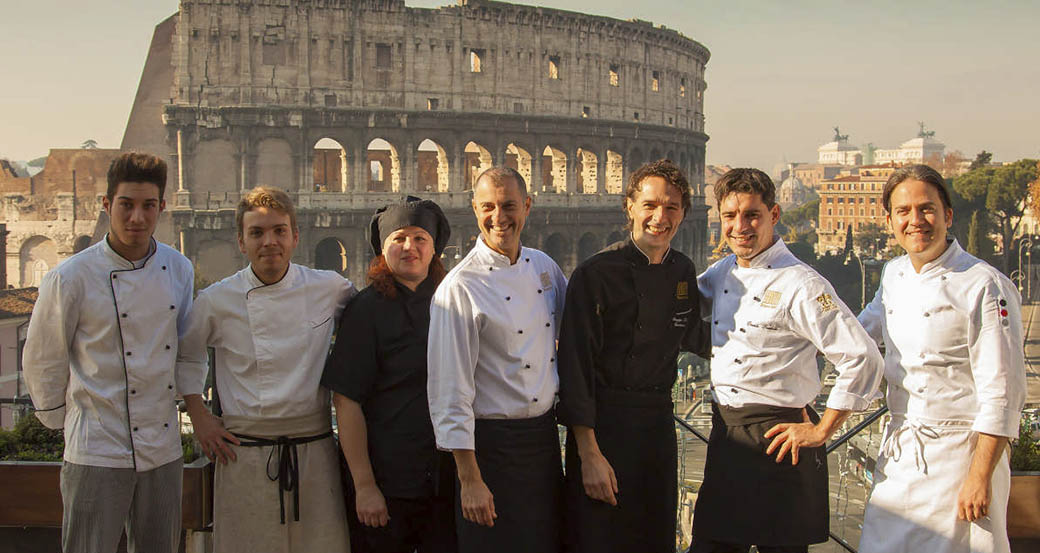 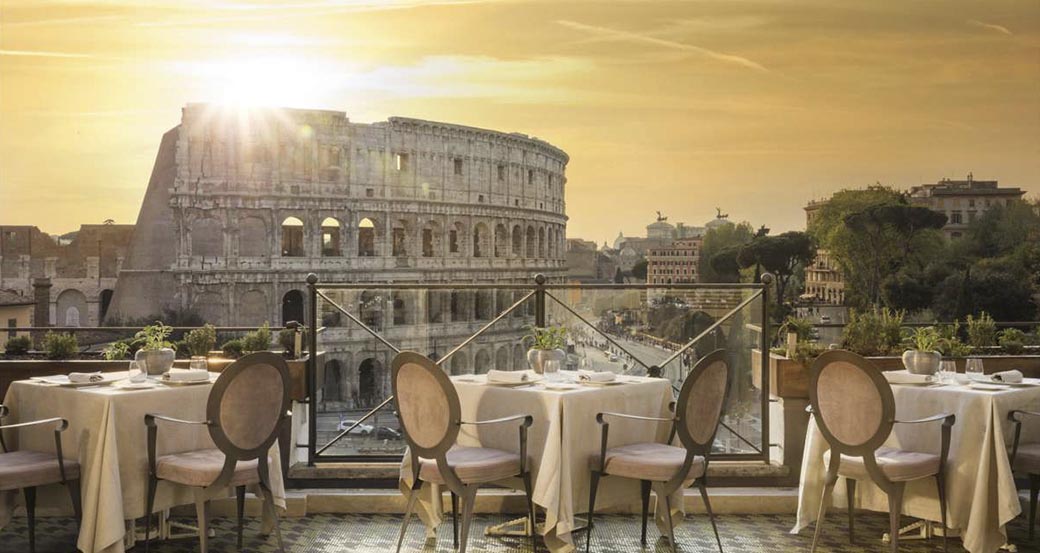 In 1957 Federico Fellini directed his wife Giulietta Masina in the movie Nights of Cabiria. Based on a story written by Fellini himself, the film is about a prostitute in Rome who searches in vain for true love. Even when she thinks she has found real happiness, things may not be what they seem: the world is simply too cynical for a pure and innocent person like her.

Cabiria waits for her clients every night in a street next to “Baths of Caracalla”, one of the best preserved ancient buildings of the Roman times. Those red–brick ruins are situated southeast of old city’s center, really close to Colosseum. In this area you’ll find several places to eat or drink a coffee while admiring Rome’s glorious past, but if you’re searching for something special we suggest you Aroma.

Located within Palazzo Manfredi, this restaurant is quite famous for its picturesque outdoor terrace offering an unparalleled Coliseum view. The stylish decor is welcoming and relaxing, with the predominance of light colors, matching the tones of the ancient ruins.

Roman-born Chef Di Lorio has been Aroma’s head chef since it opened in 2010. He has created a sophisticated menù, built around the finest local ingredients. You can choose between two tasting menus,  one showcasing the chef’s unique creations and the other devoted to regional specialities. Specialities include coffee-marinated codfish and boiled cheek of veal with grapefruit sauce and curry chips.

After dinner, you can stop at the cocktail bar The Court for a drink right in across the Ludus Magnus.

We have selected a series of stops not to be missed in two of the most fascinating territories of Tuscany. Between nature, culture and, of course, good food and an overnight stay with a high rate of comfort and luxury.

To make your cinematic journey unforgettable is this itinerary with locations immortalized in Albertone’s movies. For each film is a luxury hotel within real Roman magnificence.